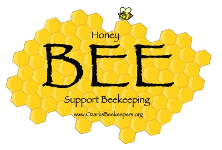 Q:  What do honeybees do?
A:  At face value, this seems like a very simple question, but when we begin to think about it and answer the question, it becomes somewhat lengthy and complicated.  First and foremost, honeybees are pollinators.  They were brought to this country by the early settlers to pollinate the various crops and plants that they brought with them. Without the honeybee, the  pollinators native to the U.S. didn't effectively pollinate these new crops, so the plants produced less than their full potential.  The honeybee did a much better, and effective job of pollinating the crops.  Next, honeybees produce honey.  Honey is produced by mixing the nectar of plants with enzymes, and drying it in the hive.  Honey is a combination of sugars, minerals and enzymes.  Finally, honeybees produce other products in the hive as well.  Beeswax, propolis, and royal jelly are all produced and collected from the hive.
Q:  Why are honeybees important?
A:  That is a great question!  Honeybees are one of our most important pollinators of the fruits and vegetables that we eat.  There are many different pollinators in our world, but the honeybee is one of the most effective and efficient of them all.  Honeybees are not native to the U.S., and were imported by the early settlers to pollinate the crops that they brought with them.  Many of the fruits and vegetables that we enjoy were not native to the U.S., and the pollinators that were present here naturally did a poor job of pollinating these new species of plants the settlers brought with them.  If not for honeybees, the produce department of the largest grocery store would be about 75% smaller!  Apples, almonds, watermelon, cucumber, oranges, peaches, cherries, and cranberries are just a few of the many fruits and vegetables that rely on honeybees for proper pollination.

Q:  How come I don't see as many honeybees now as I did when I was a kid?
A:  In the late 1980's and early 1990's, a parasitic mite was accidentally introduced that preyed upon honeybees, both those kept by beekeepers, and those living in the wild. The "wild" honeybees were wiped out by this mite, and many beekeepers lost large numbers of their colonies to this pest.  Today, most bees that you see are kept by a beekeeper, and any colonies in the wild, are some that got away from a beekeeper.  Beekeepers have medications today to help control the pest, but colonies that swarm away from a beekeeper are usually doomed to die because of the mite.

Q:  What products do honeybees produce?
A:  The main product produced by honeybees of course is honey.  Bees collect nectar from flowers, mix it with some special enzymes, place it into cells, and dry it to produce honey.  Another product from the hive is beeswax.  Beeswax is produced by young worker bees to produce the comb that the bees use to store honey, or raise their brood in.  Another product from the hive is Propolis, or commonly called "Bee Glue".  Bees gather sap and other resins from plants to produce a sticky substance called propolis, which they use to coat the interior of the hive, fill cracks, and cover objects inside the hive.  Propolis exhibits anti-biotic properties, and prevents the growth of harmful bacteria in the hive.  Finally, Royal Jelly, a food produced by young worker bees, and fed to queen larvae, is another product from the hive.  Royal jelly is used as a dietary supplement by some people.  Most Royal Jelly is produced in Asian countries.
Q:  What is the hierarchy of the honeybee colony?
A:  Honeybees are a "social insect" like ants and termites.  It is a wondrous society that is controlled by pheromones or scents produced by the members of the colony.  There is one queen bee in each colony.  The queens role is to hold the colony together, and to produce eggs.  At the peak of egg production, the queen can lay up to 2000 eggs per day and will average from 175,00 to 200,000 a year.  Most of these eggs that she lays are fertilized, and will develop into worker bees. The queen can live up to 5 years in the colony.   At the peak of the season, the worker bees can number about 70,000.  The worker bees clean the hive, build comb, protect the hive, and become foragers for the last 3 weeks of their life.  A workers life is tough, and they only live about 6 weeks in the summer. The queen can also lay unfertilized eggs.  These unfertilized eggs develop into male bees called Drones.  At peak of the season, there may be a couple thousand drones in a hive.  The drones are much larger than workers, have no stinger, so therefore cannot sting.  They contribute nothing to the colony.  They can even feed themselves and rely on workers to feed them.  Their only job in the scheme of things is to leave the hive and mate with any virgin queens in the area.  Once a drone mates, he dies.  Those drones that make it all summer long will be kicked out of the hive with the arrival of fall, and die.

How to join Ozark Beekeepers?